Zacks Investment Research cut shares of Puma Biotechnology (NASDAQ:PBYI) from a buy rating to a hold rating in a report released on Tuesday, Zacks.com reports. They currently have $11.00 target price on the biopharmaceutical company’s stock.

According to Zacks, “Puma Biotech's second-quarter earnings and revenues beat estimates. The company’s only marketed drug Nerlynx is approved for early-stage breast cancer patients in the United States and other countries. Recently, the FDA approved Nerlynx’s combo to address the third-line breast cancer indication. This should drive its sales in the future quarters. The nod was based on data from the NALA study. Notably, several studies on Nerlynx targeting different types of breast-cancer patients for earlier-line settings are underway. However, Puma Biotech is solely dependent on Nerlynx for growth. Hence, any regulatory setback for the drug will hurt the stock. Moreover, Nerlynx sales vary from quarter to quarter, which are a persistent woe. Shares of the company have outperformed the industry year to date.”

Puma Biotechnology (NASDAQ:PBYI) last announced its quarterly earnings data on Thursday, August 6th. The biopharmaceutical company reported $0.08 earnings per share for the quarter, beating the Thomson Reuters’ consensus estimate of ($0.26) by $0.34. The firm had revenue of $70.60 million during the quarter, compared to analyst estimates of $58.21 million. Puma Biotechnology had a negative return on equity of 283.51% and a negative net margin of 17.25%. Puma Biotechnology’s quarterly revenue was up 31.0% on a year-over-year basis. During the same period in the previous year, the company earned ($0.57) earnings per share. On average, equities analysts anticipate that Puma Biotechnology will post -0.83 EPS for the current fiscal year.

Read More: What is the Difference Between Common Shares and Convertible Shares? 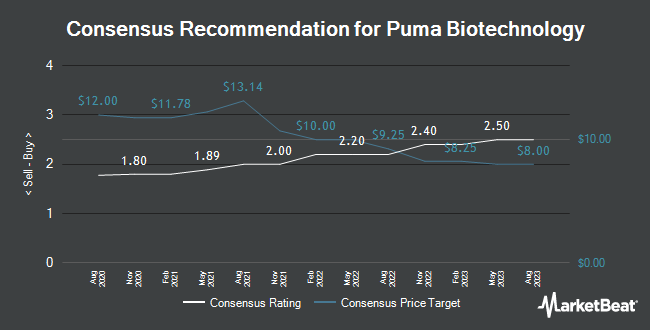 Enerplus Corp Given Consensus Rating of “Buy” by Analysts

NetApp Inc. Expected to Announce Earnings of $0.72 Per Share

Complete the form below to receive the latest headlines and analysts' recommendations for Puma Biotechnology with our free daily email newsletter: