Equities analysts expect Brunswick Co. (NYSE:BC) to report $1.29 earnings per share for the current quarter, according to Zacks Investment Research. Eight analysts have made estimates for Brunswick’s earnings, with the highest EPS estimate coming in at $1.48 and the lowest estimate coming in at $0.98. Brunswick posted earnings per share of $1.10 during the same quarter last year, which would indicate a positive year-over-year growth rate of 17.3%. The business is expected to announce its next earnings results on Thursday, October 22nd.

According to Zacks, analysts expect that Brunswick will report full year earnings of $4.08 per share for the current fiscal year, with EPS estimates ranging from $3.24 to $4.33. For the next financial year, analysts forecast that the business will post earnings of $5.15 per share, with EPS estimates ranging from $4.49 to $5.59. Zacks’ EPS calculations are an average based on a survey of sell-side research analysts that cover Brunswick.

Brunswick (NYSE:BC) last issued its quarterly earnings data on Thursday, July 30th. The company reported $0.99 earnings per share for the quarter, beating the Zacks’ consensus estimate of $0.45 by $0.54. Brunswick had a positive return on equity of 23.56% and a negative net margin of 0.84%. The business had revenue of $987.80 million during the quarter, compared to analysts’ expectations of $801.62 million. During the same period in the previous year, the firm posted $1.45 earnings per share. The company’s revenue was down 15.2% on a year-over-year basis.

In other news, VP Randall S. Altman sold 3,746 shares of the business’s stock in a transaction dated Friday, August 14th. The stock was sold at an average price of $65.06, for a total value of $243,714.76. Following the completion of the sale, the vice president now directly owns 13,011 shares of the company’s stock, valued at approximately $846,495.66. The transaction was disclosed in a document filed with the Securities & Exchange Commission, which can be accessed through the SEC website. 0.70% of the stock is currently owned by insiders.

The company also recently announced a quarterly dividend, which was paid on Friday, September 11th. Stockholders of record on Tuesday, August 25th were issued a $0.24 dividend. This represents a $0.96 annualized dividend and a dividend yield of 1.55%. The ex-dividend date was Monday, August 24th. Brunswick’s payout ratio is currently 22.17%. 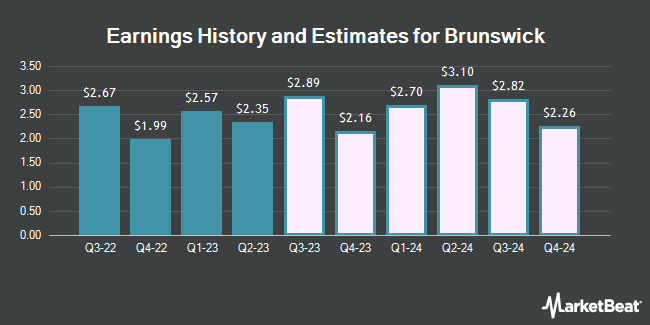 $4.02 Billion in Sales Expected for Avnet, Inc. This Quarter

Complete the form below to receive the latest headlines and analysts' recommendations for Brunswick with our free daily email newsletter: