According to Zacks, analysts expect that Southern First Bancshares will report full-year earnings of $2.04 per share for the current year, with EPS estimates ranging from $1.87 to $2.20. For the next fiscal year, analysts anticipate that the company will post earnings of $2.85 per share, with EPS estimates ranging from $2.65 to $3.10. Zacks Investment Research’s EPS averages are a mean average based on a survey of analysts that that provide coverage for Southern First Bancshares.

Southern First Bancshares (NASDAQ:SFST) last issued its earnings results on Monday, August 3rd. The bank reported $0.60 EPS for the quarter, beating the Zacks’ consensus estimate of $0.38 by $0.22. The firm had revenue of $28.98 million for the quarter, compared to analyst estimates of $22.44 million. Southern First Bancshares had a return on equity of 10.65% and a net margin of 18.93%.

In other news, Director Leighton M. Cubbage sold 2,300 shares of the stock in a transaction on Monday, September 21st. The stock was sold at an average price of $25.10, for a total transaction of $57,730.00. Following the completion of the transaction, the director now directly owns 71,201 shares in the company, valued at approximately $1,787,145.10. The transaction was disclosed in a document filed with the SEC, which is accessible through the SEC website. Corporate insiders own 8.48% of the company’s stock.

Further Reading: What are gap-down stocks? 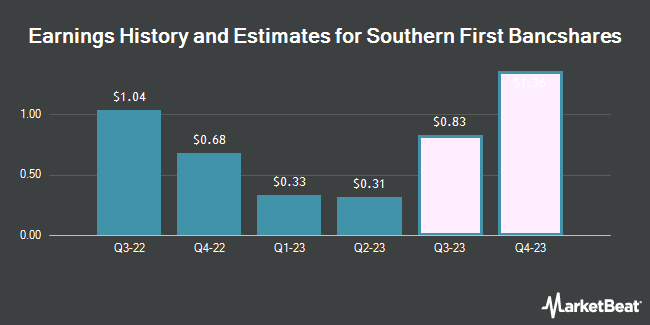 Complete the form below to receive the latest headlines and analysts' recommendations for Southern First Bancshares with our free daily email newsletter: