Equities analysts expect that Mesa Air Group, Inc. (NASDAQ:MESA) will report earnings of ($0.03) per share for the current fiscal quarter, according to Zacks Investment Research. Three analysts have made estimates for Mesa Air Group’s earnings, with estimates ranging from ($0.48) to $0.25. Mesa Air Group reported earnings per share of $0.36 during the same quarter last year, which indicates a negative year-over-year growth rate of 108.3%. The business is scheduled to announce its next earnings results on Wednesday, December 9th.

According to Zacks, analysts expect that Mesa Air Group will report full year earnings of $0.66 per share for the current year, with EPS estimates ranging from $0.62 to $0.71. For the next fiscal year, analysts forecast that the company will report earnings of $0.56 per share, with EPS estimates ranging from ($0.05) to $0.95. Zacks’ EPS averages are a mean average based on a survey of sell-side research analysts that that provide coverage for Mesa Air Group.

Mesa Air Group, Inc operates as the holding company for Mesa Airlines, Inc, which provides regional air carrier services under capacity purchase agreements with the American Airlines and the United Airlines. As of December 31, 2019, it operated a fleet of 145 aircraft with approximately 742 daily departures to 144 cities in the United States, Canada, Mexico, Cuba, and the Bahamas.

Featured Story: How does the Beige Book influence monetary policy? 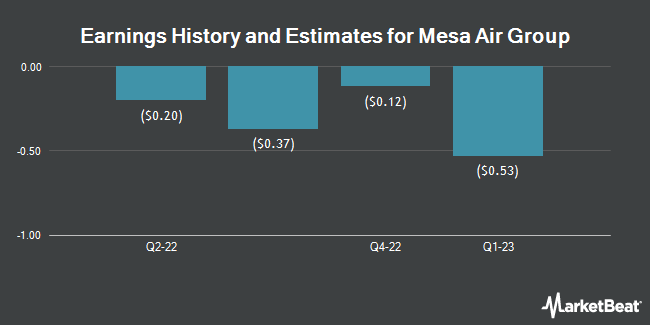 Complete the form below to receive the latest headlines and analysts' recommendations for Mesa Air Group with our free daily email newsletter: