Equities research analysts expect Cars.com Inc. (NYSE:CARS) to announce $142.51 million in sales for the current quarter, according to Zacks Investment Research. Two analysts have provided estimates for Cars.com’s earnings. The lowest sales estimate is $142.00 million and the highest is $143.01 million. Cars.com reported sales of $152.09 million during the same quarter last year, which suggests a negative year-over-year growth rate of 6.3%. The firm is scheduled to issue its next quarterly earnings results before the market opens on Monday, November 9th.

On average, analysts expect that Cars.com will report full-year sales of $539.30 million for the current financial year, with estimates ranging from $538.60 million to $540.00 million. For the next year, analysts expect that the firm will post sales of $598.77 million, with estimates ranging from $595.18 million to $602.35 million. Zacks Investment Research’s sales calculations are an average based on a survey of research analysts that that provide coverage for Cars.com.

Cars.com (NYSE:CARS) last released its quarterly earnings results on Thursday, July 30th. The company reported $0.12 EPS for the quarter, beating analysts’ consensus estimates of ($0.66) by $0.78. Cars.com had a positive return on equity of 11.67% and a negative net margin of 224.10%. The company had revenue of $102.01 million during the quarter, compared to analysts’ expectations of $94.32 million.

In other Cars.com news, CEO Thomas Alex Vetter purchased 12,000 shares of the stock in a transaction on Monday, September 14th. The shares were bought at an average price of $8.50 per share, for a total transaction of $102,000.00. The transaction was disclosed in a filing with the Securities & Exchange Commission, which is available at this link. Also, CRO Douglas Neal Miller sold 3,371 shares of the stock in a transaction that occurred on Monday, September 14th. The stock was sold at an average price of $8.62, for a total value of $29,058.02. The disclosure for this sale can be found here. 0.47% of the stock is owned by company insiders.

Cars.com Inc, through its subsidiaries, operates as a digital automotive marketplace that connects local car dealers to consumers in the United States. The company offers a suite of digital solutions that creates connections between individuals researching cars or looking to purchase a car with car dealerships and automotive original equipment manufacturers.

Get a free copy of the Zacks research report on Cars.com (CARS) 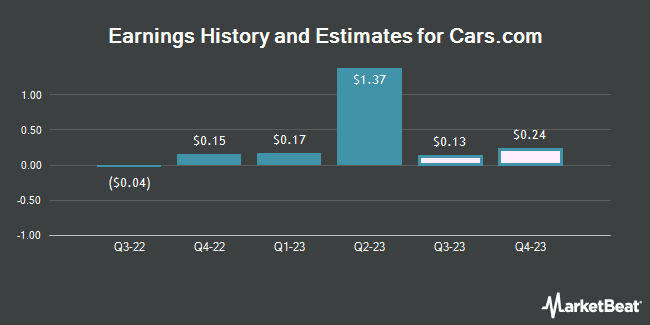 Receive News & Ratings for Cars.com Daily - Enter your email address below to receive a concise daily summary of the latest news and analysts' ratings for Cars.com and related companies with MarketBeat.com's FREE daily email newsletter.

Complete the form below to receive the latest headlines and analysts' recommendations for Cars.com with our free daily email newsletter: