United States Lime & Minerals Inc (NASDAQ:USLM) declared a quarterly dividend on Wednesday, October 28th, Zacks reports. Shareholders of record on Friday, November 20th will be given a dividend of 0.16 per share by the construction company on Friday, December 11th. This represents a $0.64 dividend on an annualized basis and a yield of 0.66%. The ex-dividend date is Thursday, November 19th.

Separately, BidaskClub upgraded United States Lime & Minerals from a “hold” rating to a “buy” rating in a research note on Thursday, October 22nd.

United States Lime & Minerals, Inc manufactures and supplies lime and limestone products in the United States. It operates through two segments, Lime and Limestone Operations, and Natural Gas Interests. The Lime and Limestone Operations segment extracts limestone from open-pit quarries and an underground mine, and processes it as pulverized limestone, quicklime, hydrated lime, and lime slurry. 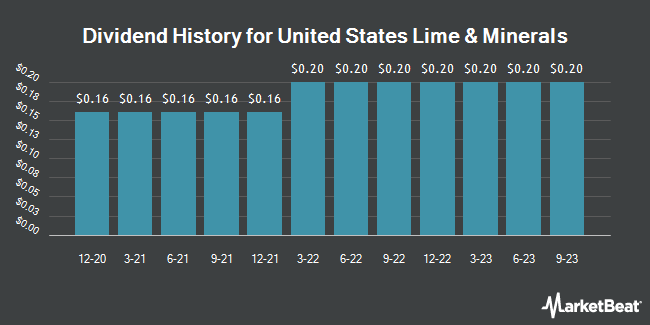 Complete the form below to receive the latest headlines and analysts' recommendations for United States Lime & Minerals with our free daily email newsletter: